Due to a terrible blizzard in February 2015, our event at a parish in Worcester, Massachusetts was rescheduled for the lovely month of May. The month of Mary our Mother. Looking back, I truly see our Lady’s hand involved and having much to due with the unforgettable meeting we had with an unforgettable priest, Fr. Dermot Roache, SMA.  This meeting was arraigned by a dear friend of whom we have the highest regard, Paul Regan. Paul is an incredible man who has been intimately involved in spreading the message of The Divine Mercy through the highest levels in the Church for decades. Since he and Fr.Roache live near Boston, we were glad to have the time available to meet with them both while in Worcester.

Our time together was indeed a blessing. Father Dermot explained to us his priesthood and how he had received the Act of Consecration of the Family to The Divine Mercy and the results of the Enthronement of The Divine Mercy program, all of which we share below in Fr. Dermot’s biography.  He showed us the card and read us the prayer. 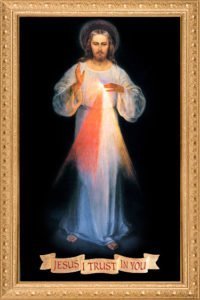 Paul explained that the prayer and card had an imprimatur and nihil obstat and when he and Fr Dermot presented it to key Marian Fathers in Stockbridge the Marians said it was “perfect.”  Yes! That is what we hoped to hear!

Father Dermot leaned over, held the prayer card before us, looked us both in the eyes and said, “Will you help me spread this prayer?” I’ll never forget the look in his eyes. He doesn’t know this, but I felt like I was looking directly into the eyes of Jesus. My eyes watered. My throat swelled. How could we say no? Why would we say no?

We were very humbled and at first a bit disappointed that we had not been able to help Fr. Dermot in this mission sooner.  Since he belongs to an order of missionary priests, it really isn’t a direct charism to “promote” a devotion.  Although he is able do as much as he can, he had been seeking help in making the program known. When he looked into our eyes, I felt I could see pain in his. The pain of having something so good for people rejected or neglected. However, this time, we said, “Yes.”

Father let out a big breath. For us, again our Lady had brought a program right to our doorstep. It was a perfect fit for the Divine Mercy for America campaign and all of our Divine Mercy programs. We would help his little team of two, he and his right arm Kathy Tierney, in any way we could to promote Enthronements and the Act of Consecration of the Family to The Divine Mercy.  Dave helped with graphics on prayer cards, brochures and pamphlets, and we’ve partnered on printing to get cost as low as possible for everyone.

By August and September we had what we needed to “launch” the program from our end.  The response has been incredible, no matter if it is from a simple recitation of the prayer during the holy hours at our events, or a parish wide enthronement of The Divine Mercy, people and families are touched!  Over and over we are thanked for bringing folks hope and a greater understanding of the depth and breath of God’s mercy, as the consecration covers all family members.  It covers them whether they are present, or not, whether they are Catholic or not, whether they are living or deceased!  It covers them all!

Act of Consecration of the Family to The Divine Mercy

O Jesus, you showed us your infinite compassionate love by exhausting the very last drop of blood and water from your body. From this day forward, with full confidence, we entrust our families to your Divine Mercy. We abandon our past, our present and our future. We place into your wounds all of our wounds which are caused by lack of love, understanding and trust. Jesus, expel Satan and all evil from our families, free us from the consequence of sin and protect us from further harm. Heal our wounds. May our families learn to venerate your Divine Image that they will never perish but experience your loving mercy. Amen.

Click here to order the prayer card and enthronement materials. 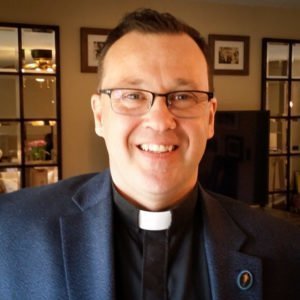 Father Dermot S. Roache is a member of the Society of African Missions (SMA Fathers). He is a native of Brooklyn, New York and a former middle school teacher. After joining the Society, Fr. Roache completed his formation and his theological studies obtaining his STB, from the Catholic University of Eastern Africa (Nairobi Kenya). He spent several more years serving as a missionary priest in Kenya as well as in the northern region of South Africa following the charism of Bishop Marion de Brésillac his founder, which is to serve “the poorest of the poor.”  It is there on mission in South Africa where the prayer “Act of Consecration of the Family to the Divine Mercy” was given to him by Our Lord. The prayer itself has become a universal mission.

South Africa is presently journeying through a post-apartheid era. There is a deep cry for much healing.  The family systems are torn apart and the demands to keep them united are near impossible to meet.  Daily Fr. Roache prayed before the Blessed Sacrament to ask the Lord what he can offer to the people to help them. It was in the middle of these realities that the family consecration prayer came to him.  He heard the Lord clearly say,  “Give the families My Divine Mercy.”  The invitation to come to the homes of his parishioners and surrender their needs to The Divine Mercy was met with overwhelming acceptance.  He and their families and friends would gather around The Image, pray the Chaplet, consecrate and enthrone their families and homes to The Divine Mercy.  Deep healing began; profound changes were clear.  The family enthronement became a new beginning for the families who had been broken, torn and without hope. The prayer is a gift to families.

In 2010, Fr. Roache was re-assigned to Boston only to discover that the family consecration prayer was meant not just for the families of a region in South Africa. The Lord had other plans. After receiving a nihil obstat from the Archdiocese of Newark and an imprimatur from Archbishop John J. Myers, D.D., JCD in 2013, the consecration prayer exploded onto the scene of the New England area and in a matter of a few short months was finding itself translated into other languages extending to other nations.  The answer to Fr. Roache’s initial question asking the Lord what he could offer to the people was answered:  The Divine Mercy is the answer to all the family problems.

Family enthronement to The Divine Mercy is establishing family unity into something practical; we are not just talking about it we are doing it.  Father Roache simply enters a home who welcomes him to pray and offer the remedy to their ills:  The Divine Mercy.  The fruits of this grace given by God are evident.  An apostolate called Family Divine Mercy quickly formed composed of lay volunteers in the Archdiocese of Boston.  It is currently in process to become a 501 (c)(3) non-profit organization with the sole mission to spread The Divine Mercy to the families of the world.  They work tirelessly to meet the growing demands of requests that are coming from different parts of the world, including Canada, Mexico, Trinidad, Netherlands, UK and Ireland. By request, the prayer has been made available in several languages:  English, Spanish, Italian, Portuguese, French, Polish, Croatian, Slovakian, Vietnamese, and Chinese.  German, Korean, Farsi Arabic and Slovenian are currently in the process of translation.

The fruits of this gift are quickly taking on life giving actions. For example, the family consecration prayer is being prayed in prayer groups, homes and parishes in many dioceses. Parents are praying it with their children. As a result of faithful recitation of this prayer many families have attested to remarkable blessings such as reconciliations between couples and children. Others have agreed to enter drug and alcohol rehabilitation programs! So many have gone to confession!

Major shrines such as The National Shrine of the Immaculate Conception, Washington DC, The National Shrine of The Divine Mercy, Stockbridge, MA and St. James Church, in the Shrine of Our Lady of Medjugorje, Bosnia and Herzegovina all offer pilgrims the family consecration prayer cards ‘free.’  Pro-Life groups and post abortive apostolates such as “40 Days for Life” and “Entering Canaan” have taken the prayer outside of Planned Parenthood to those considering abortion. Others are using the prayer for healing.

An “Act of Consecration of the Family to The Divine Mercy” along with the Chaplet has been welcomed into some prisons in the United States where the inmates have taken the responsibility to pray in cenacles for themselves and the families of the world.  In fact, one prison chaplain in Texas wrote attesting to the change that The Divine Mercy has made in the lives of those inmates who have embraced it stating, “The change in these men is beyond telling.”

Even though our family systems are being torn apart and the demands to keep them united are near impossible to meet, The Divine Mercy has come to enter our lives, to restore it to its dignity.

In the past, Fr. Roache has spoken about his mission work in Africa and the crucial responsibility we have as a Church to build up Christ’s family in underdeveloped places.  He teaches The Divine Mercy as a vehicle to restore the dignity of the family. He has been invited to speak about his work and the family prayer on radio programs such as: Relevant Radio with Drew Mariani, As the Spirit Leads, (Philadelphia) and “Don’t Give Up” – Ave Maria Radio and In His Sign with Kathleen McCarthy. In September of 2014, Fr. Roache addressed the participants of the annual International Week of Prayer and Fasting at the National Shrine of the Immaculate Conception in Washington, DC calling on all present to turn to and to consecrate their families to The Divine Mercy.