A Report from the Front Lines — By Joan Maroney 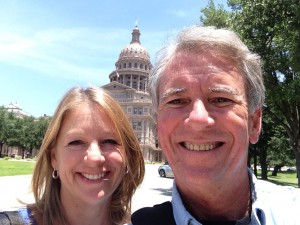 Wow, what a day it was in Austin – Friday, July 12, 2013.  Dave and I arrived in Austin about 11:30 a.m. and decided the most important thing to do was to attend noon mass at St. Mary Cathedral about 1 ½ blocks from the Texas State Capitol.  Of the 50 or 60 attending holy mass, about 20 where there in blue shirts. I thought there would be more, but I guess folks were already at the capitol.

In his homily the priest reminded us that the Lord is a mobile God, He goes with us wherever we go, as He traveled with the Israelites.  Although I was a little disappointed that no mention was made of the pending bill or a special blessing bestowed upon those fighting for it, we hung on to his words about the Lord present with us and walked out of the church armed for battle with Jesus Christ “in tow.”  We also called upon the heavenly hosts of angels as we walked over to the capitol.

About 60 were in line to enter the building, half wearing blue, half wearing orange.  Well, actually some were representing neither side; they were just there to visit the capital, apparently unaware of the activities taking place there this day. 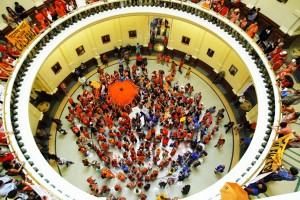 From outside you could hear the roar of voices.  Until we entered it was unclear as to what exactly was being said, but it never ended.  We had thought about bringing our six year old granddaughter with us, but was thankful we didn’t because we knew she would not have wanted to enter that building, not only because of the noise but because of the vibes we could feel.  A nauseating feeling settled in my stomach and gripped my throat.  Take a deep breath. Enter. 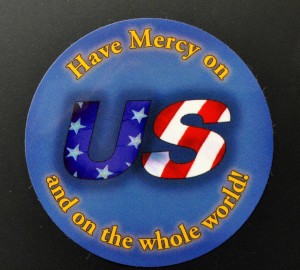 We went through the metal detector and my bag was searched.  The Divine Mercy for America cards and stickers I had brought were pulled out and I was told they were not allowed in.  “Why not? What is wrong with having prayer cards?”  I didn’t have that many, less than 100. What was the big deal?   Another trooper said she would check to see if these would be permissible, but after about 10 minutes she came back and said the word was no.  My choices were to take them back to my car or throw them away.  Throw them away??  No way.

I remained calm and said I really wanted to know the reason why these items were forbidden.  The trooper called her supervisor so I could speak to him, but said it would be several minutes before he could make it over to me.  In the end I decided to go back outside and distribute what I had out there since folks could bring one in without a problem.  I would have to get back in line and wait to get back into the building, but I didn’t care.  I was not going to throw these prayer cards in the trash.  Dave stayed inside taking pictures while I went back out with my mission.

Once outside I found to my dismay that most of the people now in line where in orange.  Uggh.  I was able to hand a few out to the blues that were in line or leaving.  They were both appreciative of the cards and surprised when I told them I couldn’t bring them in.  With several still in my hands I decided to go to the end of the line and just wait.

Well, right behind me walked up a priest and then another man who was a deacon from the cathedral.  They graciously took a card as another man came over to introduce himself to the priest.  He was a District Deputy for the Brownsville area in South Texas.  He was leaving.  Perfect!  I asked if he would take the cards back to Brownsville, the southern tip of Texas.  He said he was only to glad to do so as he handed me his card and told me he would post it on their website. Thankfully, we now have a good connect with the Brownsville Knights of Columbus.  Praise be to God!

Now sandwiched in line between orange shirts, I took the opportunity to have a discussion with the priest and deacon about the connection between the Chaplet of Mercy and the sin of abortion in Warsaw during the 1930’s.  When I mentioned that 85% of Warsaw was destroyed in WWII because of this sin, I could tell the ears of the orange shirts had heard.  I sincerely hope it gave them something to think about.  I have a weird feeling that, at least for one of them, it may have. 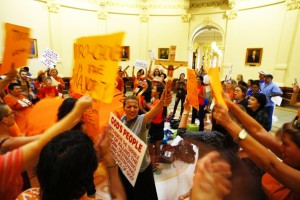 Once back inside I found Dave and we positioned ourselves in line with others wearing blue.  Eventually we made it up the steps to the third floor and then stood along the walls waiting in line to enter the Senate Chamber.  We waited patiently for hours.  The entire time the yelling and chanting and screaming of the pro-abort team never stopped.  It rattled my innards.  The blue team for the most part kept quiet.  First of all, there was no way to compete with the noise.  Secondly, it seemed like we were all pretty much amazed at what we heard and saw.  I remembered Jesus was with us.  But then, no; it was we who were with Him.  We were now amidst the shouting voices as He walked the road to Calvary.  We were with Him as the “hired witnesses” slandered Him with false accusations.  This was an amazing and unexpected journey that will remain in my soul always. 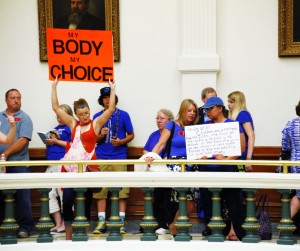 The blue team, myself included, actually looked blue. By that I mean sad.  It was so, so sad to see and hear so much anger and hate.  It was so sad to see so many young women wearing orange shirts, waving their signs that to me made no sense.  I wondered how many of them really knew what this was all about.  I wanted to ask the-what seemed to be- nice girls standing in line in front of us if they have ever had an abortion, or if they knew women that have had them, or men that have contributed to them, because I did.  Did they know anyone who was happy about having an abortion, because no-one I knew was, and there are many.  Yet this was not the time or the place to try to have this discussion.  We would just have to continue to pray. 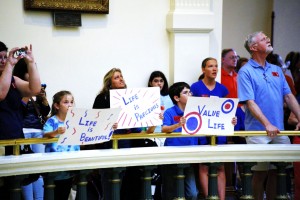 I did say a few things to a few people though that surprised me and my husband.  To a young man passing out orange stickers that said, “Stand up for Texas Women.”  I incredulously asked, “Stand up to hurt them?”  He was surprised and said, “No, not to hurt them.” “But this does hurt them, “ I said.  He looked down and walked away.  To three young girls passing by I said, “Girls, choose life, or you will regret it.”  They just kept walking.  Then, after hours of hearing the ranting and watching the behavior of those around us I found myself quietly responding, “Go to hell. Go to hell. Go to hell.”  I was wishing we could scream this as loudly as possible and with as much vigor as the orangites. Let me be clear, these words were NOT intended for any single soul there, please do not misunderstand me.  My heart was filled with sorrow and love for them, well most of them.  These words were for the demons that had a hold of these men and women.  I wanted these devils to leave, to leave now, and to go back to the netherworld where they belong.  Of course this kind of chant would certainly have been mistaken and misunderstood, and I knew it was not what our Lady would have been saying, so I got a hold of my tongue, shut my mouth and continued to make the Way of the Cross. 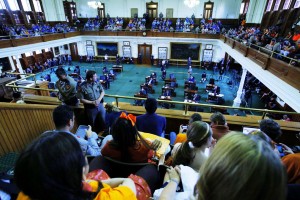 At 5:00 we made it into the Senate Chamber.  And, wouldn’t you know it, the nice usher sat Dave and I smack dab in the middle of an orange section!  Oh, how I did not want to sit there.  But, we really had no choice.  The orange group didn’t seem happy about it either.  I then realized that this was exactly where we needed to be, with Jesus and the angels, two blues in the middle of all the oranges.  As the senator who presented this bill was being questioned by the other senators, the orange group around us would snicker and sneer at his answers. 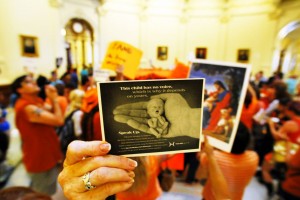 As one senator related the moving story of the 23 week old premature birth of his chief of staff’s child, a child that could have been aborted, they laughed at him and mocked him.  How rude and how cold can you be?  Uggh. Stay calm Joan.  No, you can’t choke or slap anyone, just pray.  Pray.

After about two hours in the chamber, the senators took a 10 minute break and Dave and I decided to leave, not because we wanted to, but in order to let others waiting in line an opportunity to sit in.  Stepping back into the gallery we were met by the noise and chaos again.  It was even worse.  Now the orange group was gathered on the capitol floor 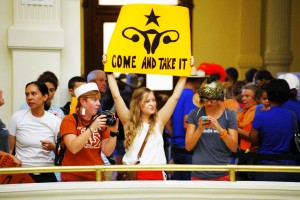 around a big orange sign bouncing tampons up and down upon it. Disgustedly some women were even wearing earrings made out of tampons colored to make them look used, such as the one in the sailor cap in this photo.  What did this have to do with anything except reveal the spirits within them?  Poor souls.  Please pray for conversions every day, especially at mass and at the three o’clock hour.  “Oh Blood and Water….”

Based on what we had heard we felt pretty confident the bill would pass.  We decided to leave the premise because there was no telling what would happen when the news came whether it passed or was defeated.  Either way, we did not want to be there. 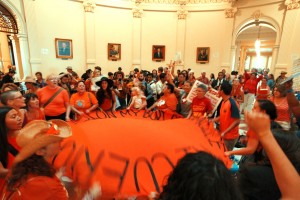 We were happy to wake up to the news that the bill passed at 11:59 p.m., with one minute to go.  Looking back on the day I would say I feel like I visited hell, especially when we looked down below to the crowd in the center of the capitol and saw and heard all that went on and on and on. 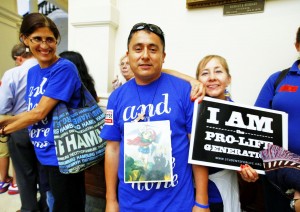 It also occurred to me the importance of the prayers of souls that are pleasing to God.  As Saint Faustina wrote, “I understood that if it had not been for the prayers of souls that are pleasing to God, that whole nation would have already been reduced to nothingness. Oh, how I suffer for that nation which has banished God from its borders!” (Diary, 818)   So please keep striving for holiness so you may be most pleasing to God.  This is the best thing we can do for our families, our country, and our world.  God bless you.  God bless Texas.  And, God bless America!