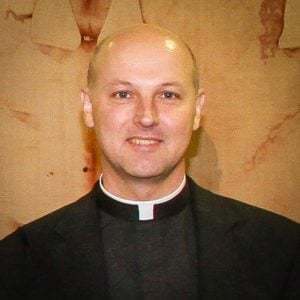 Cry Out to Heaven
Two weeks ago in the parable of the Good Samaritan, Jesus spoke of the man “going down” from Jerusalem to Jericho. It is an image of mankind’s fall: God’s holy city of Jerusalem represents the life of grace, whereas Jericho represents man’s earthly city and the life of sin.
Jerusalem is located high in the mountains. Jericho is located near the Dead Sea, which is the lowest place on earth. Water flows into it from the Jordan River, but there is no outlet—it evaporates, leaving the lake full of salt and unable to sustain which embodied the fall of mankind, and these were Sodom and Gomorrah. In the first reading, God speaks of the unspeakable sins of those cities, which “cry out to heaven for justice.” God has a dialogue with Abraham about whether He should destroy those cities, and Abraham intercedes with him, because his nephew Lot lives among them. God promises Abraham that even if there are only 10 righteous men living in those cities, He will be merciful, and will not destroy them. But once Lot and his family leave Sodom, there are not even 10 of God’s people left, so at that point fire and brimstone rain down, making Sodom and Gomorrah living images of hell. Lot’s wife turned around to look back, and she was turned into one of the salt pillars that you still find along the Dead Sea today. As long as there were ten men of God, He would spare the cities. Ten men represents a synagogue. God is telling us that as long as you have a “church,” a gathering of the faithful, even the bare minimum, that small sacred assembly can intercede for an evil society and God will have mercy upon it. But if the church disappears, there is nothing to hold back God’s justice.
The Old Testament says there are some sins that are so evil they literally “cry out to heaven” demanding Vengeance. One is murdering the innocent, as when Cain murdered his brother Abel in cold blood (Gn 4:10). Another is oppressing the poor with cruelty, as when Pharaoh enslaved the Israelites in Egypt. And the other sin that cries out to heaven is the unmentionable sin for which Sodom is infamous, men defiling the image of God through unnatural relations with each other. All sin offends God, but some sins “cry out” for justice because they affront God more directly. God made man with a beautiful dignity: a human nature that is the image of God Himself. God’s plan for marriage and children is built into our human nature and expresses the image of God, who made man “male and female” in order to “be fruitful and multiply.” These sins in Sodom and Gomorrah insult the Creator because they directly and intentionally undermine this dignity.

Accept It as Normal
Reading the account of this particular sin carefully (Genesis 19), you see that it is not simply the case of individuals struggling in a personal way with the weakness of the flesh. Every human being has struggles with sinful tendencies – Abraham himself is an example of that – because Original Sin has wounded our human nature. Some people struggle with “same sex” feelings and tendencies that they didn’t necessarily cause, or have full control over. God is merciful to the struggling sinner, to the man or woman who recognizes a disorder in their lives, and is humble enough to turn to Him for help and healing as they struggle to live out the 10 Commandments. But that is not what was going on in Sodom and Gomorrah. In these cities people were openly embracing a sinful lifestyle. More than that, they were insisting that everyone accept it as normal. When they discovered that Lot’s family did not agree with them, and condemned that lifestyle on religious grounds, they began a campaign of persecution, reserving a special viciousness for God’s messengers. They sought to desecrate God by defiling the purity of these angelic young men. This is what was so terribly evil about those sins. Not simply that sinners were struggling with sinful tendencies. But rather that citizens of the world had rejected God in favor of a sinful lifestyle, and were defiant against His moral law which says this activity is prohibited. As a result, God turned those cities into places of fire and brimstone, showing that this sinful lifestyle, openly embraced, amounts to a rejection of God which leads to hell.
The similarities between Sodom and Gomorrah and our society today are striking. Sexual perversion is promoted as normal. Those who say it is wrong are accused of hatred, and persecuted. You cannot produce a movie or television show unless it deliberately features this lifestyle as acceptable.
Many Catholic Cathedrals, from Toronto to New York, have been desecrated by activists who interrupt the Mass, thrown human waste in the church, and trample the Eucharist. Cardinal Arinze was openly mocked when he gave a commencement address at Georgetown University and spoke of the institution of marriage. Just as happened with Lot’s family and God’s messengers, the Catholic Church and those who uphold its teachings, are attacked. They are labeled as “haters,” criticized for being “judgmental,” and accused of “imposing their views” on others. To uphold a moral law is not to impose one’s personal views on someone else. Moral laws are not “personal opinions.” They are objective realities which God has written into human nature. Nature itself has the laws; we are not imposing anything when we learn and explain them. On the other hand, when the laws of nature are denied and everyone is pressured go along with it, or the supreme court decrees that the denial of marriage is marriage, that is when you have people trying to “impose their views on everyone else.” That is what happened in Sodom and Gomorrah, and that is what is happening in our society today. Evil works through lies.

Pray and Intercede
God is merciful – He is infinitely merciful – but when mankind defiantly tells God that we make the moral laws instead of Him, and when we defile the dignity of His image that He has put in us, these are the sins that “cry out to heaven.” As Catholics, we our like Abraham, and Lot’s family. We have to live in the midst of these fallen societies, yet remaining faithful to God. We don’t belong to them, we belong to God, and we are committed to the divine and natural Law. Lot’s wife “looked back” and was turned into a pillar of salt. She had a hard time resisting that place. She had been corrupted by its values. It is easy for that to happen to us as well. We can easily be seduced and corrupted by the society around us, and even start defending these practices. We start out as Catholics, but we end up supporting the murder of innocents and the destruction of marriage. And when we are called to be counter-cultural, we prefer to go along. If we can’t protect our children and our families from these influences, we must leave, and look for another place. Maybe this means taking our children out of public school and look for a Catholic school, or homeschool. Maybe we have to avoid television and the movie theater altogether. One way or the other, we will have to confront this challenge: what does it mean to be God’s “synagogue,” His Church? What exactly is our role living in the midst of these cities?
Regardless of the world, at least in our parish – at least in our homes – we will support each other in our pro-life and pro-family commitments. We will form our children according to the dignity of the image of God in them and not the false values of Sodom and Gomorrah. We will have our struggles, none of us is perfect, God’s way is demanding, and we will be tempted. But the world proclaims a bold-faced lie. Only God’s law will lead to peace and joy. And God is merciful to the sinner. When we fall (because we all do), we do not deny or rationalize but humbly confess we have done wrong and turn back to God for forgiveness. We never try to tell God He is wrong. We are not defiant. God continues to have mercy upon our society, for the purpose of conversion, and that defines the Church’s mission in such a place: God gave His Son to save us, and the Church is the instrument of the world’s salvation.
Like Abraham, we therefore pray and intercede for our society. We support those who struggle with sin, especially those in the Church who are vulnerable to being misled. And we announce the Gospel, begining with the call to conversion. It doesn’t matter that we are a small minority, “ten.” Fidelity to God will cause them to bang on our doors demanding we stop. That is the Pentecostal moment of witness, when our words can confront the lie, infused with all the power of heaven. It is the same Holy Spirit of Fire, coming down from heaven, that is hope and salvation for some, fire and brimstone for others.