And there was a great battle in heaven, Michael and his angels fought with the dragon, and the dragon fought and his angels: And they prevailed not, neither was their place found any more in heaven.And that great dragon was cast out, that old serpent, who is called the devil and Satan, who seduceth the whole world; and he was cast unto the earth, and his angels were thrown down with him.  -Revelation 12:7-9

Beautiful and inspiring book about the angels, full of stories from the Saints. Gives their nature and role, the need for devotion to them and their relationship to the Blessed Virgin Mary. Many prayers to the angels. Written to be read daily during September, the month of the Angels. 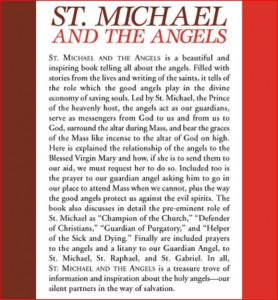 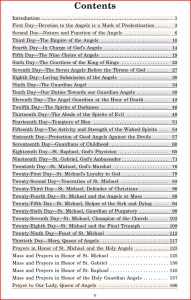 “AUGUST QUEEN OF HEAVENS! Sovereign Mistress of the angels! Thou who from the beginning hast received from God the power and mission to crush the head of Satan, we humbly beseech thee to send thy holy Legions, that, under thy command and by they power, they may pursue the spirits, encounter them on every side, resist their bold attacks and drive them hence into the abyss of eternal woe. Amen.”