Sodom & Gomorrah – In the last few weeks the Church has been leading us through the story of Abraham and his interaction with God over Sodom and Gomorrah.  I am sad to say that in a certain sense I felt like Abraham’s nephew Lot a few days ago as I hopped into a taxi for a ride to the airport.  I was catching a flight back home to Texas after visiting our new grand-baby who was born in our nation’s capital, Washington DC. Although I didn’t want to say goodby I was relieved to leave the atmosphere of constant public display of immoral lifestyles behind.  Lot and his family lived in Sodom and fled just before Sodom and Gomorrah were destroyed for unspeakable sins which “cry out to heaven for justice”. 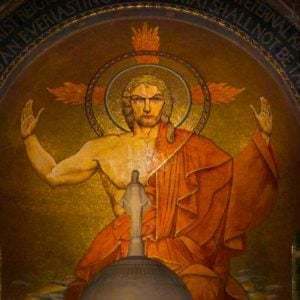 Justice
Other than visiting our son and his growing family in DC, one of our favorite things to do in the district is to visit the Basilica of the National Shrine of the Immaculate Conception. The huge mosaic of Christ on the ceiling dons a serious scowl. Several people have told me they don’t like that depiction of Jesus because He looks angy, but I do. It reminds me that the Lord is not only merciful, but just. Think about it. How do we expect the Lord to look when He sees so much sinfulness in the world? He does not like sin. How do we expect Him to look when He sees His children being taken advantage of, hurt, tortured, unloved? His scowl is for the wicked who hurt his children and work to destroy His church. His scowl is what we should expect to see from this perspective. 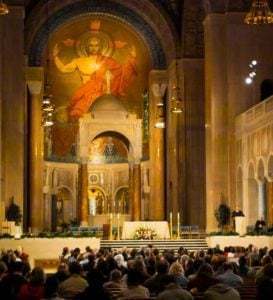 Gratefully, I was able to take our 2½ year old grand daughter to this stunning basilica and national treasure for holy mass last weekend. We were able to sit all the way in the front on the third row so she could take it all in. And she did! Sitting directly in front of the ambo and under that thought provoking visage of Christ previously mentioned, the first reading pierced my heart and soul; the Sodom and Gomorrah story. How interesting in light of my daily experience in the public square of our capital.

The connection to modern times was inescapable, especially when we understand, as our friend Fr. Glen Mullan points out, that these cities were not only, “embracing a sinful lifestyle.  More than that, they were insisting that everyone accept it as normal.”  Hmmm.  Too close for comfort!

Sitting in a pew in a city where this very kind of behavior is rampant, I took shelter in the the gaze of another mosaic, this time the Blessed Virgin Mary. I thought about Abraham as he dared to find the limit of God’s mercy, as he persisted in asking how many righteous souls would need to be present in Sodom & Gomorrah to save it. Thankfully, the answer:  for as low as ten he would not destroy it.  What does ten signify? Father Mullan points out:

Ten men represents a synagogue. God is telling us that as long as you have a “church,” a
gathering of the faithful, even the bare minimum, that small sacred assembly can
intercede for an evil society and God will have mercy upon it. But if the church
disappears, there is nothing to hold back God’s justice.

We, each one, must be one of the ten good souls. God’s mercy is infinite, but when we reject his love, we avail ourselves to the absence of God and the consequences of that rejection. For Sodom & Gomorrah, it meant complete destruction with fire and brimstone.

In the 1930s, according to Saint Faustina, the chastisement of Sodom and Gomorrah discussed in a  conversation between she and the Lord.   Jesus tells her that a particular city in her country of Poland would be chastised for its sinfulness in the same manner as Sodom and Gomorrah were chastised for theirs. Jesus instructs her on how to intercede. St. Faustina follows the instructions and Jesus responds with blessings. As in the discourse between the Lord and Abraham, here again mercy is offered because of the intercession of a righteous soul.

One day Jesus told me that He would cause a chastisement to fall upon the most beautiful city in our country. This chastisement would be that with which God had punished Sodom and Gomorrah. I saw the great wrath of God and a shudder pierced my heart. I prayed in silence. After a moment Jesus said to me, My child, unite yourself closely to Me during the Sacrifice and offer My Blood and My Wounds to My Father in expiation for the sins of that city. Repeat this without interruption throughout the entire Holy Mass. Do this for seven days.

On the seventh day I saw Jesus in a bright cloud and began to beg Him to look
upon the city and upon our whole country. Jesus looked down graciously. When
I saw the kindness of Jesus, I began to beg His blessing. Immediately Jesus said,
For your sake I bless the entire country. And He made a big sign of the cross over our country. Seeing the goodness of God, a great joy filled my soul. (Diary entry 39) 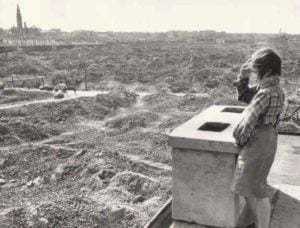 Although the Lord did bless the city and indeed the entire country at that time, St. Faustina’s prophesy was fulfilled a few years after her death when in 1945 85% of Warsaw was completely destroyed by Nazi bomb crews, including 90% of its historical monuments.

Once Lot and his family left Sodom less than ten righteous remained and it was at that point that the chastisement came.

So, what’s the message here? The message is that our lives right here, right now, matter! Where we stand on moral issues matters. Our behavior matters. How we vote matters. Everything we do or don’t do matters. And, in the midst of all this is the question we must ask ourselves: Am I pleasing to God?  Does Christ look upon me and the way I am living my life and faith with a smile, or with a scowl?

So lets commit ourselves to taking full advantage of every grace available to be more and more pleasing to God and a better and better intercessor for mercy.  Let’s call upon the Holy Spirit to help remind us how important this is as we read St. Faustina comments on Communist Russia in passage 818 of her Diary:

“If it hadn’t been for the prayers of souls that are pleasing to God, that whole nation would have been annihilated long ago, that nation which has banished God from its borders.

Photos of Christ by Dave Maroney